WHY IS IT WORTH INVESTING IN DZIERŻONÓW 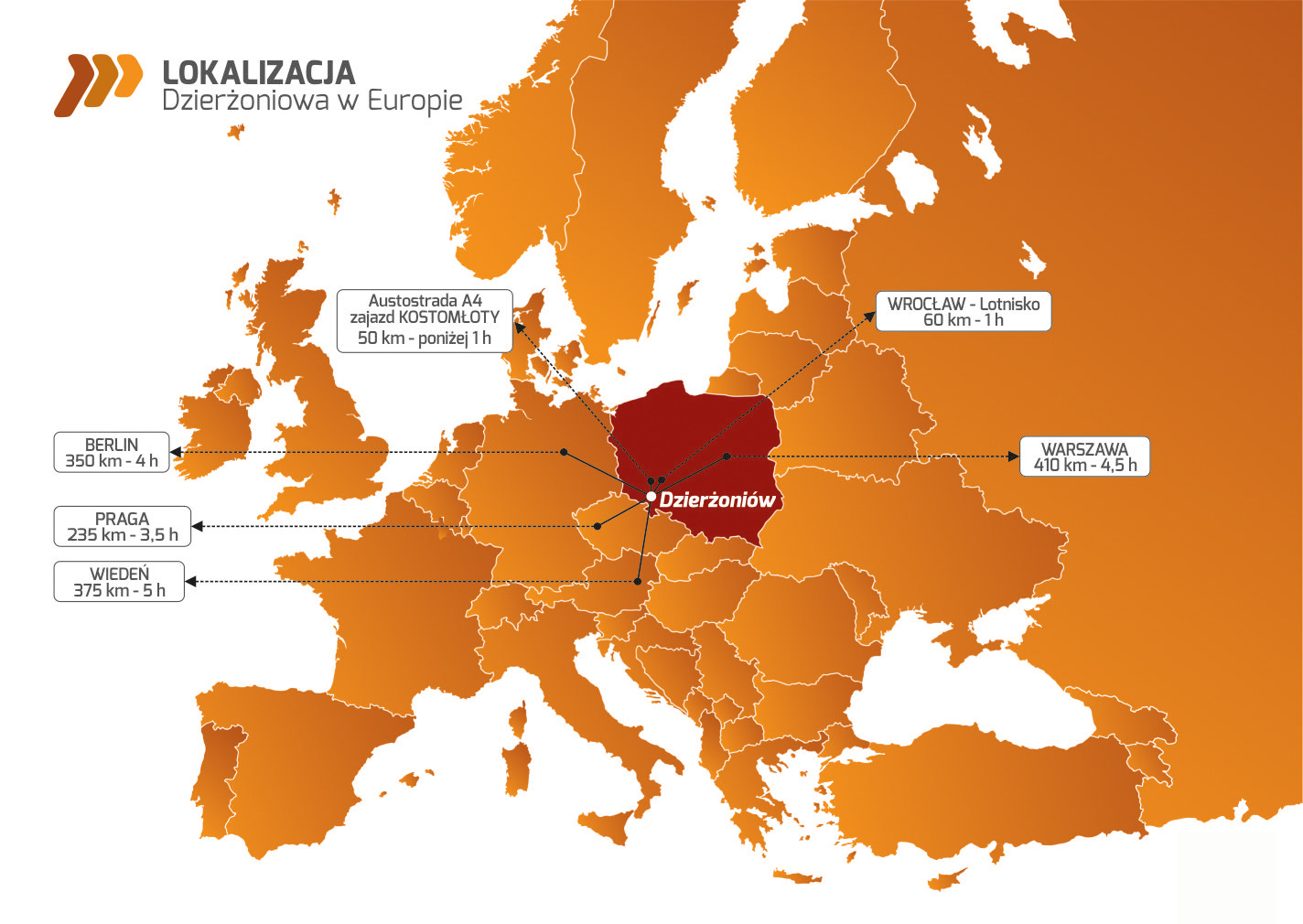 The city appeals to investors with its attractive geographic location (location in close proximity to national roads, the Czech and German borders and the Wrocław metropolis), as well as its large socio-economic potential. There are over 4,000 business entities registered in the city. Although most of them are businesses with domestic capital, foreign investors are also eager to locate their businesses in Dzierżoniów. Germans, Americans, Koreans, Danes, Swedes, Italians, Austrians and French have already invested in the city. Modern technologies have an increasing share in the economy of Dzierżoniów.

Dzierżoniów is located in the south-eastern part of the Lower Silesia Province and covers an area of ​​20.07 km2. The distance from the provincial city of Wrocław is 60 km - 1 hour.
From Dzierżoniów you will get to:

The Dzierżoniów Subzone plays a key role in the development of the local economy. It operates within the Wałbrzych Special Economic Zone and offers favorable conditions for locating investments. Currently, 20 companies operate in its area, which in total invested PLN 874.32 million and created nearly 2,422 jobs ( as of December 31, 2021).

An investor starting or developing business in the city has the opportunity to take advantage of tax preferences: real estate tax exemptions and income tax exemptions within the Polish Investment Zone. The city supports the promotion of local entrepreneurs by organizing an economic fair - Dzierżoniowskie Presentations each year. The good condition of the economy in Dzierżoniów has a positive effect on the level of unemployment and the wealth of the society. Year by year, unemployment is decreasing and wages are steadily rising.

The Dzierżoniów Industrial Park is located near the Dzierżoniów Special Economic Zone, at st. Strefowa and covers an area of ​​7.5 ha. In part of this area, Invest-Park Development - a company whose shareholder is the Dzierżoniów City Commune, built two production and warehouse halls with sanitary and office facilities based on the acquired European funds. The first, with an area of ​​2,890 m², was put into use in 2011, then in 2017 was expanded by another 950 m². Currently, two companies (Edytor Drukarnia-Wydawnictwo and Broen S.A.) operate in them. In the second hall, with an area of ​​4018 m², commissioned in 2014, is used by Franklin Products Ltd. and Broen S.A.

Another modular production hall with ready-made office facilities will be built by Invest-Park Development in Dzierżoniów in the fourth quarter of 2023. This is a response to the market need and a solution already proven in our city. The company's latest investment is 4,000 sq m. 800 square meters of a production hall, divided into four independent modules, and 700 square meters of office space.

Investment incentives used in the city

What do entrepreneurs say about us?

The economy is divided into 3 main sectors - agriculture, industry and services. In Poland, as in most places in the world, agriculture developed first. From the 19th century on, industry began to develop on a large scale. After World War II, the communist authorities based our economy on heavy industry, based on the extraction of hard coal in Upper Silesia. Only after the breakthrough of 1989, when we switched to a free market economy, services could begin to develop with full force - trade, transport, telecommunications, banking, education, tourism, environmental protection and many others.
Currently, services dominate in Poland. The leader is Wholesale and retail trade, transport, accommodation and the food industry. Industry is in second place, and public administration, national defense, education, health care and social activities are third. The following positions are occupied by: Professional, scientific and technical activities, Construction and Real Estate.
In Poland, there is a three-tier administrative division into 16 provinces, 379 counties and 2,478 communes.
State administration is divided into government administration and local government administration. Government administration is a group of administrative bodies headed by the Council of Ministers. Local government administration is the local and regional administration.

Dzierżoniów is located in the Sudeckie Przedgórze, in the immediate vicinity of the Sowie Mountains, which favors mountain tourism (hiking and cycling) and winter sports - cross-country and downhill skiing.
The Sowie Mountains are also one of the most mysterious mountain ranges in Poland. One of the attractions of the Owl Mountains are mysterious buildings, corridors and tunnels, the so-called "Project Riese" left underground by the Nazis (Sztolnie Walimskie, Complex Osówka or Włodarz). Their purpose is not fully known to this day.
There is a large number of historic buildings in the city, which you can get to know while walking along the Dzierżoniów Dragon Trail. It is an urban tourist and walking route covering the most interesting monuments and tourist facilities of Dzierżoniów, including: the Town Hall and the observation tower, the Kellner House in the Market Square, the Sadebecki Chapel and the Cloth Hall, the Church of St. st. George, Hilbert's Mill, Executioner's House, Synagogue, Defensive Walls, Water Tower, "Zbyszek" Cinema, Dzierżoniów Town Museum.
The TRAKT DIORY tourist route has also been created in the city, which is also an educational path showing the heritage of Diora. The brass radios (1: 1 scale) located in the old town center of Dzierżoniów “tell” about the history of the radio industry and its influence on the city's development.

In addition, we encourage you to visit the surroundings of Dzierżoniów as part of one-day walking tours:
1. Pieszyce:
• The Black Knight Route,
• The Route of the Two Towers,
• The Big Owl Route,
• The Route Over Kłomnica.
2. Piława Górna:
• Monuments and tourist attractions,
• Monuments of industrial architecture,
• Live and inanimate nature trail.
3. Dzierżoniów:
• Trakt Diora,
• The Dragon's Road.
4. Bielawa:
• Trail of the rebellion of Sowie Mts. Weavers,
• Taverns at the foot of the Owl Mountains,
• Bielawa - Venice of the North.
5. Niemcza:
• City route - around the castle (on foot),
• Educational route around the city (by car).
6. Łagiewniki Commune:
• Przystronie - Łagiewniki Sokolniki - Jańska Góra (part of the Ślężański Landscape Park),
• Słupice - Góra Radunia (Ślężański Landscape Park),
• Dwór Szachulcowy - the Trzcinowy Pond.
7. Dzierżoniów Commune:
• Nature and Educational Trail Kiełczyńskie Hills,
• The Nature and Historical Trail in Piława Dolna.